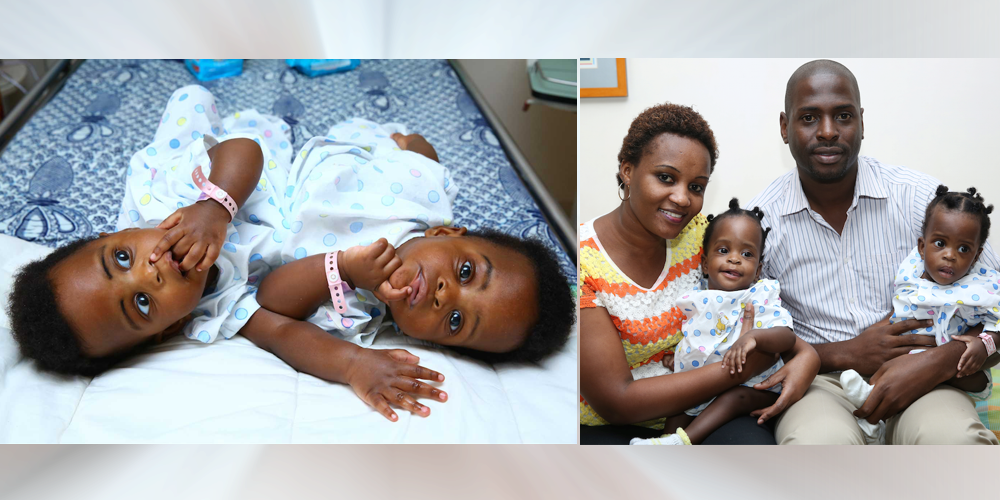 5 month old Adriana and Abriana were born attached to each other at the front part of the chest and abdomen – a condition that is called thoraco-abdominal omphalopagus. The twinning was discovered after birth and the babies were flown from Tanzania to Apollo Children’s Hospital, Chennai.

Thoraco-abdominal omphalopagus twinning is a rare event. It is seen in one in 100,00 live births and is very variable in presentation depending on the organs being shared.  Most such twins die after birth and very few live till separation. Fewer still reach a center of excellence where, separation can be carried out successfully. Adriana and Abriana were once such thoraco-omphalopagus twins. Work-up showed that the liver was being shared and the two hearts were inside one chamber and touching one another. It was not clear if the intestines were separate or if any major blood vessel anomaly was present.

The work-up involved three dimensional reconstructions of the internal organs on CT scans which was studied by the surgical teams which discussed and practiced the maneuvers needed for a successful and speedy separation. A 25-member team was constituted.

The first problem to be sorted out was – how do we get enough skin to cover the large defect, which will be left in the front part of the body after separation?? In preparation for this the plastic surgeons inserted inflatable prostheses to increase the amount of skin, which, would be available later for closure.

At 9 months of age when the infants were vaccinated, thriving and had enough skin for closure they were taken up for surgery. The procedure took 11 hours, 7.5 hours for separation with three teams. The two hears were separated and given separate covers, the livers were separated and each child had one half of a liver with a gall bladder.  Closure of the front part of both twins was done by two teams of plastic surgeons and took three and a half hours. Special care was taken to cover the chest over the heart and the children were shifted to the Intensive Care unit.

In the Post-operative period there were many problems – wound infections and break down, bowel obstruction and many others. However the ICU team worked round the clock and salvaged both babies.

No surgery speaks more about the value of teamwork and meticulous preparation like ‘twin separation surgery’.

However the joy in the eyes of the parents as they fondle the two babies separately makes all the effort completely worthwhile.